Last week, Facebook started testing a new model in which publishers’ content no longer appears in users’ newsfeed, unless they pay to “promote” it. The new model has been deployed in six geographies as a test. Facebook have since announced that they have “no plan to roll this out beyond these test countries” – unless of course these very tests reveal that “it’s an idea worth pursuing any further”.

I have always been quite skeptical about the potential benefits that social media can have for brands, especially when it comes to Facebook. It seems to me that the costs involved with owning or outsourcing a dedicated social media department typically outweigh the potential benefits. One of the very first articles that I ever wrote online was making that very point. That was in 2013.

A lot of things changed since then, and I have gone from skeptical to convinced – for most brands, organic social media marketing is a complete waste of resources1

Looking back at the social media craze

Most brands initiated their social media operations somewhere between 2007 and 2013. Looking back at what the mindset was at this time makes it very clear – it was heck of a gold rush. Most brand managers were running around and ramping up their social media presence (and spending), in the hope of stumbling upon the great sought-after treasure – aka the buzz.

The general consensus at the time was that it was possible to hit the marketing ROI jackpot thanks to social media. With very little investment, one could reach billions, thanks to word of mouth and network effects. Here’s a quote from a Business Insider article from 2011 that sums it up well:

The promise of social media marketing–messages spreading from your targets to their friends through their social graph–is real, at least for these brands on Facebook.

Everybody rode the trend. Academics published papers suggesting ways to systematize virality, “viral marketing agencies” became a thing, and of course marketing professionals went on a shopping spree, while bragging in specialized media about their flashy campaigns and social monitoring centers.

And I have to say, it looked appealing. Especially since there were three other strong supportive arguments in favor of investing in social media once you were hooked by the virality bit:

Not much, really. Turns out, all of the points above have now been proven wrong.

For your typical Fortune 1000 company, running social media operations now accounts for about 15% of the total marketing budget – and it is expected to grow by 90% within three to five years. In most categories, consumers don’t even care about talking to you (wink, wink, Charmin Toilet Paper’s 0.001% engagement rate). Finally, it became impossible to reach more than 0.5% of these audiences brands thought they would own, without paying a hefty “sponsoring” premium. It sucks.

The graph below shows how organic activity on Facebook went from being attractive-ish, to becoming completely useless. 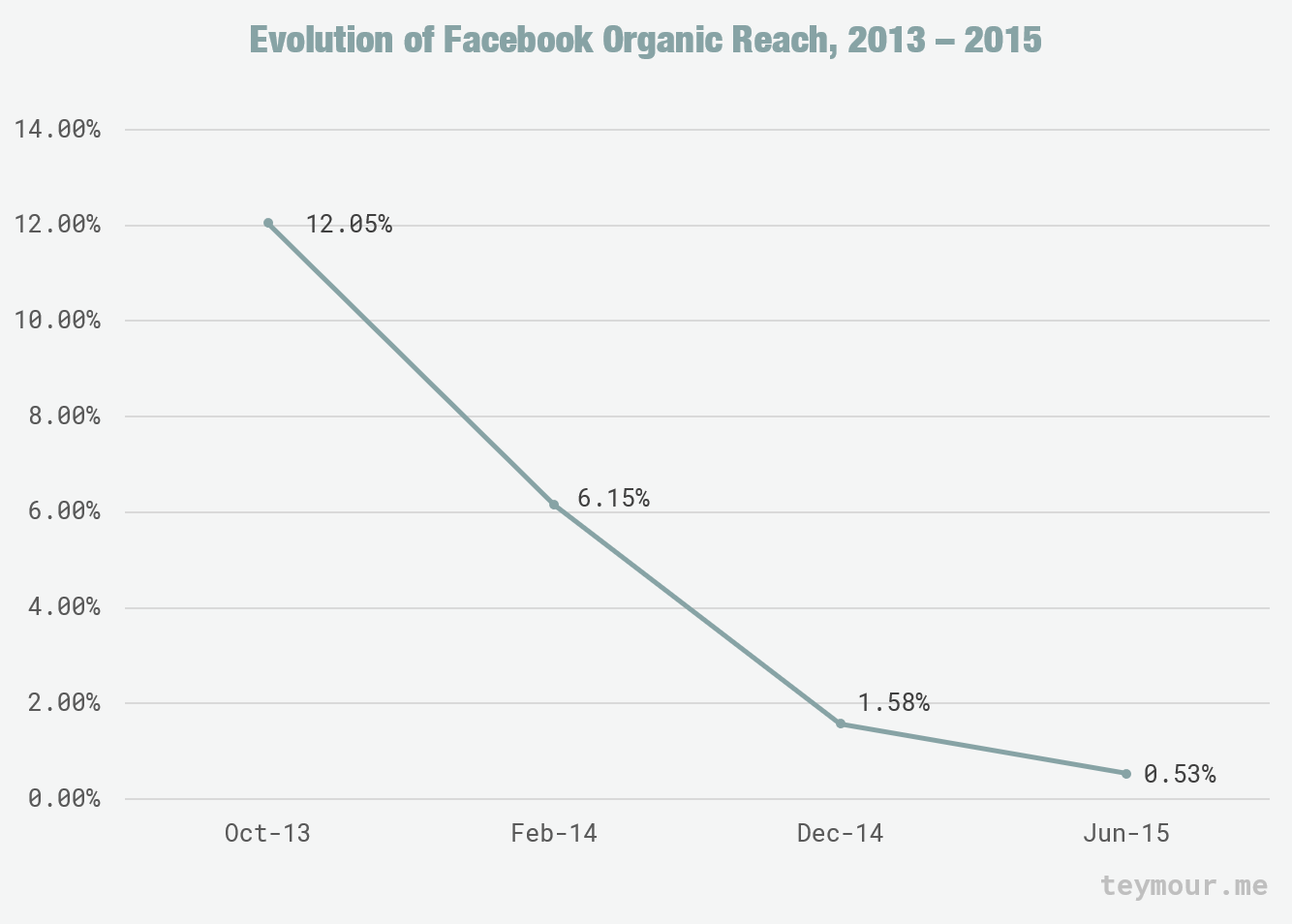 It also gives you the rationale behind why Facebook organic marketing is now everything but cheap. Do the math: is it really worth it to hire hordes of social media strategists and community managers to craft neat editorial lines and social strategies when your posts will end up reaching just 0.53% of your audience?3

To me, the answer is a massive no. Now that doesn’t mean that I am advocating for a total social media runaway. I am actually willing to recommend the opposite: stay there. Facebook – you already know it – offers unique targeting capabilities that allow you to chase down relevant consumers and leads in a really efficient way. The path to achieve that though, is not paying social strategists to do organic marketing. It’s paying Facebook for targeted ads instead.

The fix: move money around

So, to the title of this post, I would suggest that you consider reallocating a good chunk of you are spending on agency fees or internal strategists, and handle that money to Facebook instead. The good news is you don’t even have to do it for real to get a precise, quantified idea of the potential results. Just do the following calculation:

If you’re like most businesses, the difference should stand out, to the point that you might now be willing to fire everybody and blow it all on ads. Don’t. Years of fighting with Facebook’s shrinking organic reach have taught social media marketers a lot about what kind of content works on Social Media and what does not. This expertise will do wonders when unlocked by the power of ad dollars.

You still need some brains to create paid campaigns that are good enough for people to engage with them. You just need less of them.